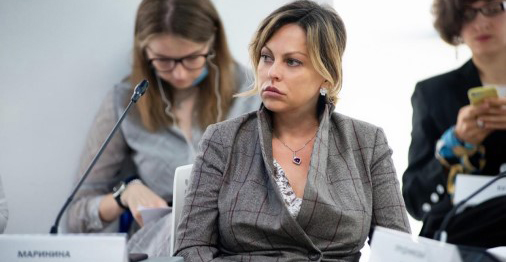 Yelena Marinina, deputy CEO of the Roscongress Foundation and director of the social platform of the Roscongress Foundation – the Innosocium Foundation, attended a working meeting with Russian Deputy Prime Minister Viktoria Abramchenko and General Director of the Agency for Strategic Initiatives Svetlana Chupsheva, where she spoke about the work that is being done to support creative industries.

The meeting was held on 23 July at the Boiling Point platform of the Agency for Strategic Initiatives in the format of a strategic session titled ‘National Strategy for the Development of Creative Industries: Human Capital as a Factor for Economic Growth’ and was attended by representatives of the creative community and development institutions.

The participants spoke about the impact that creative industries have on the implementation of the national Ecology project and the development of rural and natural territories as well as eco-tourism in Russia. “Developing and introducing creative technologies in rural areas will be a decisive factor in the revival of the Russian countryside, increasing employment and business activity, and will significantly contribute to the creation of comfortable living conditions. Whereas in cities official and unofficial clusters are the main form in which creative industries are concentrated, in small towns and rural areas cultural events are serving as such points of growth”, Viktoria Abramchenko said.

In her address, Yelena Marinina noted that the social platform of the Roscongress Foundation – the Innosocium Foundation – has been consistently working for several years to promote the creative agenda as part of the Building Trust project at major business events. The project is an effective discussion and presentation platform for museums, galleries, libraries, youth initiatives, and companies working in the innovation sector from various regions of Russia.

In addition, a legal framework is being developed to support creative industries in the Khanty-Mansi Autonomous District as part of a trilateral agreement concluded between this region, the social platform of the Roscongress Foundation – the Innosocium Foundation, and the Russian Culture Centre federal state budget-funded institution. The implementation of this agreement will create favourable conditions for creative projects in the region, including mechanisms to provide financial support for such projects and to promote their products on foreign markets.

“There are a lot of gifted people in Russia’s regions. Our job is to provide them with comprehensive support so that individual creative projects will form a powerful creative industry that will become a significant part of the entire Russian economy. This requires a systematic approach that consolidates the efforts of the state, business, development institutions, and non-profit organizations. In this regard, we are grateful to all our partners and separately to the Agency for Strategic Initiatives for a regular dialogue and the development of effective solutions as part of joint working groups”, Yelena Marinina said.

Marinina also used the occasion to invite the audience to the Russian Creativity Week International Festival, which is being organized by the Russian Culture Centre and the social platform of the Roscongress Foundation – the Innosocium Foundation, with the support of the Russian Book Union and the Presidential Grants Fund. The festival is expected to be one of the top ten most influential creative industry events in the world. Its programme will encompass various cities of Russia and will conclude on 11-13 September in Moscow at Gorky Park, where more than 300 educational, business, and entertainment events grouped into 14 areas will be held: from publishing and journalism to game development, music, design, fashion, cinema, and IT.