The Russian Cultural Centre, the Government of Yugra and the Innosocium Foundation Sign an Agreement on Development of the Creative Industries in the Khanty-Mansi Autonomous District–Yugra 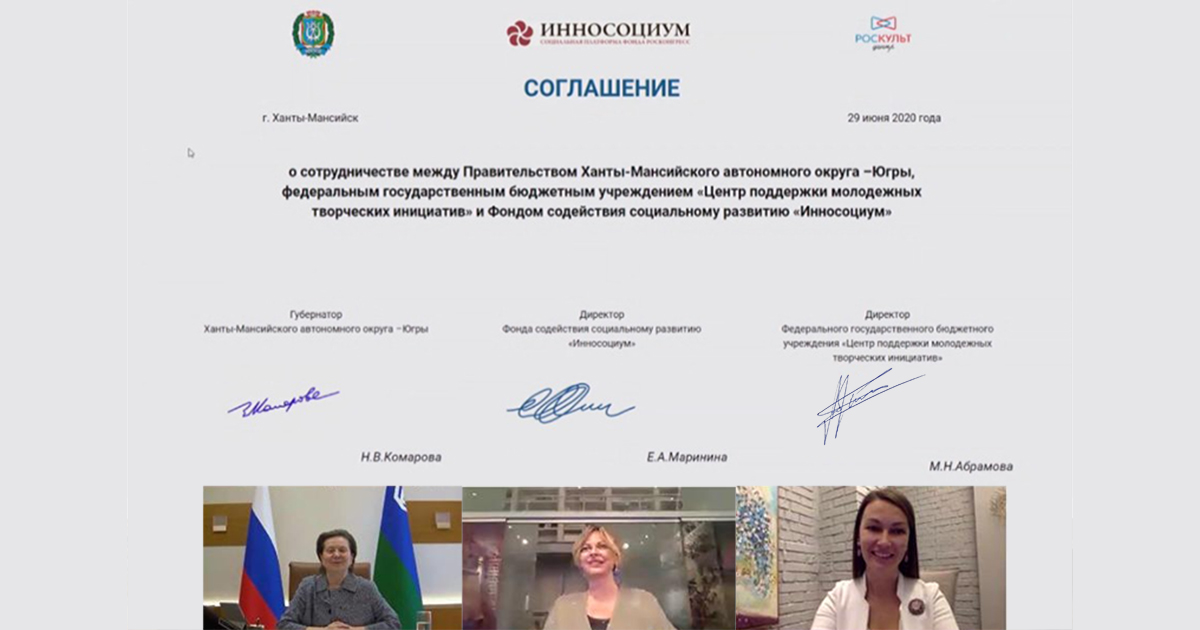 The agreement on cooperation between the Yugra government, the Russian Cultural Centre and the Roscongress Foundation social platform – the Innosocium Foundation – was signed today, 29 June, by video-conference.

The document was signed electronically by Governor of the Khanty-Mansi Autonomous District Natalya Komarova, Director of the Russian Cultural Centre Marina Abramova and Director of the Innosocium Foundation Elena Marinina.

“Yugra is a region with a history going back many centuries and with an active, young, modern population. We rely on traditions, while creating and implementing technologies of the future. By signing this agreement, our region’s Government is creating the conditions for developing the creative potential of its own people and guests, and supporting young people’s creative initiatives,” said Natalya Komarova.

According to the Governor, the creative industry’s main resource consists in people, with their skills, knowledge and talent, capable of advancing socio-economic relations to new stages of development. In this connection, the head of the region believes, further improvement is needed of state mechanisms for supporting the creative potential of the populace as a way of maintaining development of culture and creativity, as the main driver of the Autonomous District’s economy. “I am convinced that, by our joint efforts, we will cope successfully with this work,” Natalya Komarova stated.

“In the Khanty-Mansi Autonomous District, a multitude of innovative projects are being implemented in the industrial sphere and the region is keeping step with the times on the economic plane. Development of the creative industries, which are today the growth drivers of the leading world economies, is a vital step in making the region more competitive. Currently, the term ‘creative industries’ is not found in legislation at the federal level so, together with the District’s Government, we are pioneers in this direction in Russia. We hope that our experience will help in developing the foundations for creating a regulatory and legal framework and will be useful for rolling out at the federal level,” noted Director of the Russian Cultural Centre Marina Abramova.

“There can be no doubt that Russia’s creative sector must be developed today. Creative industries play a crucial role in development of the state in the age of Industry 4.0 and constitute one of the most dynamic economic sectors,” – Innosocium Foundation Director Elena Marinina summed up. “Today, together with the Russian Cultural Centre and the Yugra Government, we are launching work on developing the region’s creative industries. Yugra has a multitude of preconditions for development of the creative industries: a favourable geographical location, developed culture, carefully preserved values of the indigenous peoples of the Far North, highly developed innovations and technologies in other sectors. This symbiosis of regional identity, rather than distribution of global models, guarantees development of the creative sphere of the economy. Signing of such an important agreement and the pilot project being implemented together with the region’s Government is a landmark event for us. I hope that we will be able to demonstrate the results of the co-operation between the Yugra Government, the Innosocium Foundation and the Russian Cultural Centre at the ‘Russian Week of Creativity’ and major Roscongress Foundation events.”

Let us note that the parties have identified among the goals of their collaboration creation of a legal framework, attainment of indicators confirming the level of development and effectiveness of the creative industries.

Implementation of the document will create the conditions for forming and developing creative skills, make them generally accessible, provide for successful transformation of public spaces into a pleasing environment for developing and realising each inhabitant’s creative potential; forming mechanisms for providing financial support for creative industry projects and investment in human potential; developing a state support model capable of promoting creative industry products on external markets; retaining and increasing the region’s personnel resources required for these industries.

There are currently over 3.5 thousand small and medium-sized enterprises operating in Yugra’s creative industries, the majority of them in the IT, marketing, advertising and design sectors.