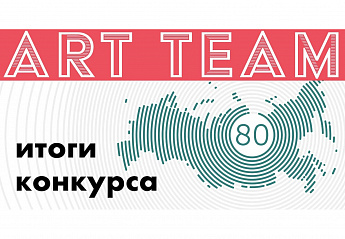 The Russian Cultural Centre and the Innosocium Foundation, the social platform of the Roscongress Foundation, have announced the results of the first Art Team National Contest of Creative Industries Projects. The final round featured 80 projects from 36 regions of the Russian Federation. Creative young people and specialists in the 20 to 35 age range who work in cultural and creative industries were invited to participate in the contest.

The authors of the 80 projects selected by a panel of experts will take part in a two-day in-person educational intensive workshop in Moscow and also have the opportunity to present their projects to potential investors at the Russian Creativity Week Festival, which is scheduled to be held in Gorky Park in September this year. The authors of the 20 winning projects will take part in a competition to receive a grant from the Tavrida Youth Forum.

The contestants’ projects were evaluated by an expert council that includes more than 30 representatives of cultural and creative industries, business, and the public authorities. Some of the notable experts include:

The following regions produced the highest number of finalists: Moscow, St. Petersburg, the Sverdlovsk and Tomsk Regions, the Republic of Tatarstan, and the Perm Territory.

The ‘Event Management’ category had 24 finalists and was followed by ‘Creative Location’ with 18, ‘Education and Art’ with 18, ‘Digital in Art’ with 12, and ‘Tourism’ with 8.

The expert panel was particularly interested in the following projects:

Learn more about the finalists’ projects on the official Art Team website. In June, the resource will become an educational platform that will feature a free online intensive course that aims to educate authors of creative projects and improve their managerial skills.

“Among the finalists’ projects, we noted several interesting, unconventional ideas as well as creative initiatives that are already being implemented, but locally, in a narrow format. We believe all of them have great potential. The programme we developed for the authors of creative projects and talented young people who are interested in further development in this field, for which we engaged leaders in the creative and business sectors to create, will enable the participants to not only receive tools to implement their ideas, but will also provide skills that will help them develop in any professional field,” said Marina Abramova, Director of the Russian Cultural Centre.

“Our goal is to help young talents shape a sustainable future. We need to become a bridge between the great minds of our times – philosophers, sociologists, designers, architects, artists, writers, and opinion leaders – and promising representatives of the new generation. By organizing exhibitions, discussions, and awards, we are creating opportunities for the development of unconventional thinking and creativity. Supporting aspiring talents is all the more important because this is how young people can become intrigued by fresh modern ideas based on which they will subsequently create their own bright future. I am certain that the Art Team contest, the Russian Creativity Week festival, and the other projects that we are implementing together with the Russian Cultural Centre will become incubators and fertile ground for innovative ideas and creative developments. As part of the Art Team contest, the Innosocium Foundation has initiated a separate category dedicated to the 75th anniversary of victory in World War II. The authors of the projects ‘Leningrad. Point of Return’ and ‘Interuniversity Literature Ball’ will join the ranks of those who will participate in the Russian Creativity Week and will be included in the talent pool,” said Elena Marinina, Deputy CEO of the Roscongress Foundation and Director of the Innosocium Foundation.

“I have always believed in the creative potential of our young people. Russia is rich with talent, and all the activities of the Centre for Film Festivals and International Programmes aim to find and promote capable, creative young people as well as create and implement new, interesting, and innovative cultural projects. The finalists of the Art Team project are certainly talented individuals. This project provides them with a unique opportunity to turn a new page in their creative life and to contribute to the development of culture and the creative industry, not only on a nationwide scale, but also internationally. The Art Team project is igniting new stars, and I sincerely wish the finalists success, to engage in creative self-improvement, and to create new interesting projects,” said Tatyana Shumova, Director of the Centre for Film Festivals and International Programmes.

The Art Team project aims to seek out promising socially significant projects in creative industries and create conditions for the professional fulfilment of creative young people through training in managerial skills and providing them with tools to launch creative projects with economic potential on the market. More information about the contest, including the full list of nominations, is available on the official Art Team website (art-team.moscow).

The Art Team project is being organized together with the Centre for Film Festivals and International Programmes, with the support of the Presidential Grants Fund.