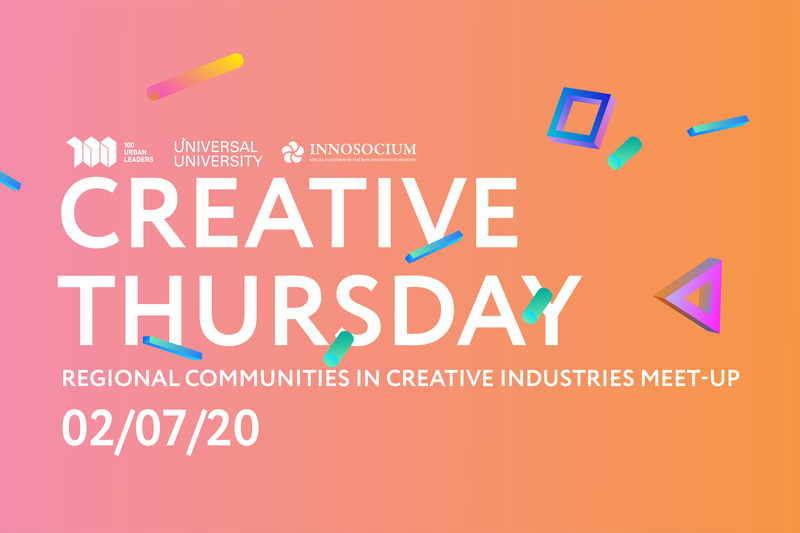 An online meetup of regional initiatives in the creative industries called Creative Thursday will be held in Russia on 2 July. The meetup will take place in four time zones over a record period of 24 hours.

The meetup was organized to bring together representatives of creative industries in Russia in an effort to find a solution to problems that have had a negative effect on the situation in various segments of the creative economy due to the COVID-19 pandemic. Experts project that losses in the creative sector could exceed RUB 150 billion by the end of the summer of 2020.

“Creative industries play an important role in the country’s economic development in the era of Industry 4.0 and are among of the most dynamic sectors of the international economy”, said Elena Marinina, Deputy CEO of the Roscongress Foundation and Director of the Innosocium Foundation. “Along with our partners, we are actively working to develop the creative industries sector in Russia. However, we now have the new challenge of solving the problems exposed by COVID-19, and we need to do this in a comprehensive manner, rather than locally at the level of specific regions and projects, and also prepare proposals for support measures and models to manage and develop the ecosystems of creative industries in the regions of the Russian Federation. This is a large-scale task and so, in order to carry it out, we have engaged leading representatives from creative clusters as well as educational and cultural spaces from 13 cities of Russia. And we will definitely use the knowledge and new contacts obtained as part of the online meetup to organize another large-scale event in creative industries – the Art Team contest and the Russian Creativity Week festival, which will be held in September in Gorky Park”.

Global studies on the contribution that creative industries make to the economy are indicative: this sector generates anywhere from 3 to 7% of GDP in developed nations. It also provides jobs for up to 8% of the active population and is growing 3–5 times faster than other sectors of the economy each year. A well-developed ecosystem of creative industries and vibrant cultural life are what attract promising young specialists, tourists, and innovative companies to the cities.

“Creative industries are among the most important non-energy segments of the Russian economy: according to various estimates, they contribute up to RUB 3 trillion a year, i.e., over 3% of the country’s GDP. In Moscow alone, according to some reports, enterprises in the creative sector have annual turnover of RUB 2 trillion and employ more than 300,000 people. To date, no systemic analytics have actually been carried out in this sector of the Russian economy. So the main mission of Creative Thursday is to get an idea of the scope of the industry in the regions, meet with representatives of the creative community in cities, identify the main problems that they have encountered during the pandemic, and find new development opportunities. Moreover, it’s an undervalued non-energy sector with high added value that we should rely now as we restart the economy after the crisis”, said Tatyana Zhuravleva, Director of the ASI Urban Competence Centre.

“The phrase ‘creative industries’ has just recently appeared on federal agendas, and it is still hasn’t been addressed in law-making. We hope that this event will provide an opportunity to hear the main leaders: the Universal University of Creative Industries, Winzavod Centre for Contemporary Art, Strelka Institute, Flacon Design Factory, Artplay Design Centre, and our colleagues from the regions. Only by coming together for such events and joint projects will we be able to develop regulations and create an environment for the development of creative industries throughout the country and then meet in person at the first Russian Creative Week [festival] in September”, said Marina Abramova, Director of the Russian Cultural Centre.

“For creative industries, where 90% of the companies are comprised of individual entrepreneurs, the self-employed, and small businesses, the coronavirus crisis has proven to be a serious test”, said Ekaterina Cherkes-zade, Director of the Universal University of Creative Industries. “However, during the pandemic, the community of creative leaders that has taken shape in Russia over the past ten years once again made it clear that the future is not in raw materials but in the creative economy. And the key word in this future is ‘partnership’. For this reason, the Creative Thursday online meetup is an opportunity to not only compare notes and understand what we will be facing in this crisis, but to also come up with joint solutions for the development of creative industries in Russia at different levels – from training creative specialists to launching new businesses and creating creative spaces in the regions.”

Thirteen Russian cities will be involved in the event: Moscow, St. Petersburg, Kaliningrad, Krasnoyarsk, Kazan, Yekaterinburg, Izhevsk, Petropavlovsk-Kamchatsky, Sevastopol, Sochi, Tula, Ulyanovsk, and Yakutsk. They will serve as the main venues carrying out the online broadcast. Each of the cities will host panel discussions on creative industries, such as education in creative industries, publishing and journalism, architecture and urban studies, computer graphics, game development, new media, marketing, art, music, design, fashion, cinema, TV, and IT.

The meetup will feature more than 30 discussions, workshops, pitch sessions, plenary sessions as well as meetings of local communities. The main questions to be addressed at the meeting: how can creative professionals influence the economy and quality of life in their city given the new realities? How can the state help form an ecosystem of creative industries in the regions today and which private initiatives are most effective? How can an idea be transformed into a business project in a crisis? What professions will be in-demand in the next few years in creative industries and where can people learn them? What is the best way to enter international markets?

Creative Thursday will be open to creative industry managers and representatives of the cultural community and the regional authorities as well as university specialists, city activists, and journalists. To view the broadcast, you need to register in advance at the link: https://100gorodov.ru/creativethursday. All the platforms will be broadcasting on the website 100gorodov.ru on 2 July. In addition, the plenary session and other events will be broadcast on the platforms of the Roscongress Foundation, the Innosocium Foundation, Russian Cultural Centre, multimedia library sites in the regions of the Russian Federation, and other partner resources. A detailed programme will be announced on 20 June 2020.