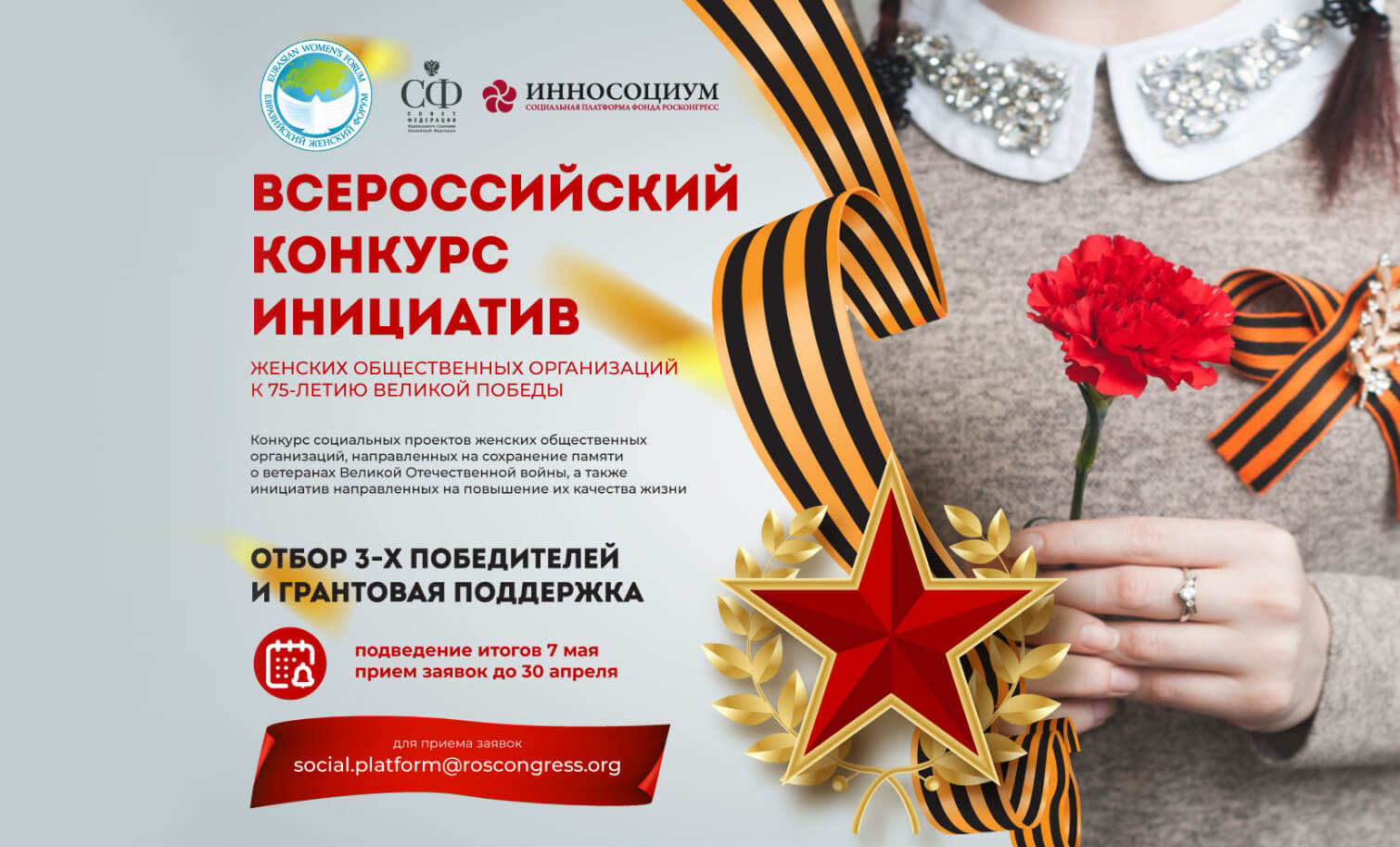 The Council of the Eurasian Women’s Forum under the Russian Federation Council, along with the Innosocium Foundation, the social platform of the Roscongress Foundation, are organizing a National Contest of Initiatives among Women’s Public Organizations to commemorate the 75th anniversary of victory in World War II.

The contest has been organized in the run-up to events to mark the anniversary of the end of World War II as part of efforts to support social projects that aim to preserve the memory of war veterans and their deeds, provide them with support and assistance, and carry out initiatives to improve their quality of life.

“We welcome the idea to hold the contest. This is a great way to encourage those who make their own contributions to preparations for the 75th anniversary of the World War II victory. We are pleased that in the run-up to this great holiday there are more and more initiatives that aim to support the eternal memory of veterans and the exploits of war. These not only include contests and projects to support veterans, but also educational campaigns. In particular, the Roscongress Foundation has launched a number of information projects in memory of the World War II victory. The shared history of our victory unites all the peoples of our country, fraternal countries, and allied countries. This is a great and important day when each of us feels a special pride in our country”, said Anton Kobyakov, Advisor to the Russian President and Executive Secretary of the Organizing Committee in charge of preparing for and holding celebrations for the 75th anniversary of the victory in World War II.

All women’s public organizations from Russia’s regions are invited to participate in the contest. Applications will be accepted until 30 April. A list of three winners will be tallied and announced on 7 May 2020.

All three winners will receive assistance in the implementation of their projects as well as grant support.

“The contest motivates public women’s organizations to get more actively involved in solving the social problems that are arising in the face of new challenges. It is crucial to support women’s projects aimed at helping and improving the quality of life of senior citizens and veterans. Particular attention will be paid to women’s initiatives and projects to prepare for celebrations of the 75th anniversary of the victory in World War II”, Federation Council Deputy Chairwoman Galina Karelova said.

“There isn’t a single family in our country that wasn’t affected by the war. We live in peaceful times today thanks to the feats of our ancestors. We should not lose sight of the feats of women, many of whom fought on the front along with men and toiled on the home front. So many women have never participated in hostilities in any other country like they did in ours. Our duty and obligation to all veterans, whose numbers, unfortunately, are dwindling each year, is to honour and preserve the memory of those difficult times and to help. Together with the Federation Council, we decided to hold a contest among women’s organizations, thereby showing solidarity and supporting women’s initiatives in particular,” said Elena Marinina, Deputy CEO of the Roscongress Foundation and Director of the Innosocium Foundation.

Applications may be submitted by email: social.platform@roscongress.org